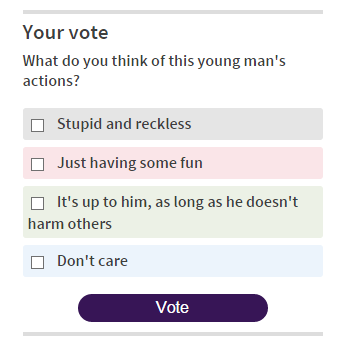 Many of my friends and colleagues know that I have a strong interest in the prevention of drowning.  While this is less of a problem in the UK than it is in many other places, it remains a significant cause of death among specific parts of the community.  In the UK, roughly 400 people will drown unintentionally each year.

This week, sudden rainfall, compounded with many other factors, led to parts of the UK experiencing serious flooding.  When this happens, people are confronted with change.  For some, an environment that they are intimately familiar with (their local road, for example) takes on some different characteristics.  For others, a medium that they feel comfortable in (water, for example) appears where they least expected it.  How people react to these changes determines how safe they are likely to be.

In Worcestershire, this week, the Fire and Rescue Service were summoned to eleven people whose vehicles had become trapped (along with their occupants) on roads that were no longer passable.  Then, news broke of a young man who had taken his cheap body-board out into the street and tried ‘surfing’ the floodwaters.  I don’t think the cost of the board is particularly relevant, but it might suggest that this isn’t a pro-surfer!

The local newspaper reported on the incident and drew on the expertise of the Royal Life Saving Society (www.rlss.org) to explain why this behaviour is somewhat reckless.  The answer lies in hidden dangers – physical (as in you don’t know what is under the surface, like raised manholes with deep chambers beneath them etc), biological (you do realise that flood water travels through sewers don’t you?), and chemical (when the water envelopes an unsealed container that would otherwise have been safe).  This was validated by the son of the young man who photographed the scene, who described the youth as ‘silly’.  It was also endorsed by inference by the F&RS.

What interests me most about this is that the Worcester News then did something that online news-streams enjoy doing these days, and added a poll so that members of the public can validate their own opinion against their peers without appearing completely weird.

They offered their viewers the four options illustrated on which to vote.

When you have done so, you get the chance to see what your peers think.  Key to understanding the point of this is that while people vote without knowing what the others think, they do so in most cases having read the content of the article.  A significant reason for voting at all is to find out whether you are ‘normal’ – in other words to confidentially validate your own opinion.  So, although they understood the dangers, knew that two voices of authority (the RLSS and the F&RS) said it was reckless, and that even a young child thought it was ‘silly’, the overwhelming majority (72%) felt that it was acceptable for him to do it.  Here is what they said;

Now they don’t tell us the sample size.  So this could be a relatively small number; it depends a little on their rounding of the percentages.  We can’t really say how representative they are of the population as a whole.  Local newspapers, and their websites, can’t be a completely true representation but they must say something!  So what kinds of conclusions can we draw about the advice receiving capacity of the population?  Well, 72% of the population seem to disagree with the advice.  Clearly, this is unlikely to be an effective strategy to get them to change their perceptions.

When people do things that they know are dangerous, where they can’t but help but realise that they are dangerous, and the worst happens, there is often a public wave of sympathy, but it takes a great many deaths before the activity is prohibited, controlled, or otherwise rendered less dangerous.  Serious climbers, round the world yachts-people and so on being obvious examples.

Conversely, when people die in the audience or, as happened recently at Shoreham air show simply on the periphery, then there’s an understandable sense that they should have been safe and protected.

Somewhere between these two extremes is day-to-day life, and in day-to-day life we know that people have grown tired of being molly-coddled.  The excesses of the Health and Safety industry have, ironically, led many people to despise being given ‘safety advice’.

Today’s ‘best practice’ often revolves around the very young generation.  If we teach them while they are young then they will get the message.  But which messages are the important ones?  We currently teach young children the risks of drug-taking, of strangers generally, of roads, and yes, unpredictable water, as well as those of unprotected sex, accessing the internet, online fraud, and even radicalisation.  But are these arguments simply going to backfire rather like the H&S message?

My sense is that it is time for us to find smarter ways of helping people to help themselves by making better choices in what they do.  Giving advice has had its day; is in danger of having the opposite effect and even encouraging informed risk-taking.